Gorillas in a group at Bwindi Uganda 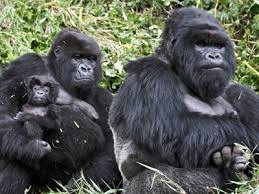 The cost of permits to view the gorillas for an hour in Uganda and Rwanda is currently the same – 500 USD pp since (May 2008). However, gorilla permits in Uganda cost 350 USD pp during the months of October and November, as well as March, April and May, considered to be the low season.

there are currently eight habituated guerrilla groups in the Bwindi Impenetrable Forest National Park of Uganda and a total of eighty permits are issued every day at eight per group. In Mgahinga Gorilla National Park there is one habituated group, but they move into Rwanda every now and then thus at times permit sales for this park is suspended.

In Rwanda’s Volcanoes National Park, there are four habituated gorilla groups and eight permits are issued per group bringing the total per day.

The permits can be booked in advance by you or by your travel agent (some people report this procedure to be slow and unpredictable) or you can book when you get to Uganda or Rwanda but then you run the risk of them all being sold out and you might have to wait (will be a problem if your time is very limited).

Bwindi is a rainforest so the vegetation tends to be a little more dense and might make photography more difficult but it all depends on exactly where the gorillas are on the day while VNP is a little more open and might afford better views.

Your chances of seeing the gorillas are excellent in both Uganda and Rwanda because they are tracked each day by experienced trackers so their locations are known down to the last 24 hours. It’s possible but quite rare for visitors not to see the gorillas.

Transport to and from the national parks if you are not using a safari company can be done using buses and taxis which seem to be reasonably reliable in both countries.

So in answer to the question of which country is better to see gorillas, it seems that they are both pretty much on par and your choice can come down to what is more convenient for you.

Bwindi is a rainforest so you can expect precipitation most of the year with the heaviest rains occurring in March-April and September-November while other months are reasonably dry. Annual precipitation is between 1130mm and 2390mm.

The annual temperature ranges between 7-20°C with the coldest period being June and July.

The climate in the Volcanoes National Park is changeable and you can generally expect both sun and rainfall during the day. At 1,700m above sea level it is generally quite cold particularly in the evening so warm clothing is advised.

The park receives a high amount of rainfall; over70 inches(1,800mm) per year and daytime temperatures average about70°F(21°C). The dry season occurs mid-June-September and December-March.

Gorilla permits for Volcanoes park effective from 2nd.June.2012 will cost USD.750 per permit.