Tracking the chimpanzee that is our ‘cousin’ is a very interesting experience. The way they feed, climb trees, respond to humans, caring for their young ones, is just phenomenal. There are three chimpanzee groups in Kibale which are habituated and only six people per group in the morning and evening. Kibale has over 1450 chimpanzees which represents Uganda’s largest population of this endangered primate. 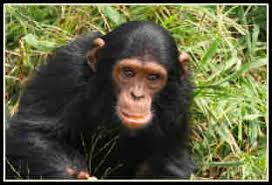 Kibale Natinal Park offers you The Chimpanzee Experience that includes Chimpanzee Habituation and Chimpanzee trekking. During the tracking, you accompany Kibale’s researchers and habituators as they follow chimpanzee during their daily activities, thereby getting them used to human presence without altering their natural behaviour. You can expect to see the chimps de-nesting (coming out of their nocturnal nests) between 05.30-06.30 before following them during the day until they create new nests and retire for the night around 19.00. The Habituation Experience runs during tourist low season months (March, April, May and November).
The most popular of Kibale’s walks starts from the Kanyanchu Visitor Centre at 08.00 and 15.00 and lasts 2-3 hours. Chimpanzee are the primate most sought after by visitors, Kibale is also home to the rare I’Hoest’s monkey and East Africa’s largest population of the threatened red colobus monkey. Other primates include the black and white colobus, blue monkey, grey cheeked mangabey, red tailed monkey, olive baboon, bush baby and potto. Other mammals are present, though rarely seen. These include forest elephant, buffalo, leopard, bush pig and duiker. A keen observer may also spot reptiles and amphibians as well as a colourful variety of butterflies Advance booking is essential during peak seasons
Another interesting area for chimpanzee tracking is Kyambura which is a small Reserve of 157 sq.km lying on the eastern side of the Kazinga Channel and forming a buffer zone to the north-eastern edge of Queen Elizabeth National Park. Chimpanzees are found along the river gorge and only eight people allowed to visit the group in the morning and in evening totalling up 16 individuals per day.
That’s not all; you can also be part of the habituation team that goes in the morning to study the behaviour of this primate in order to make them get used to human beings.

Another Gorilla Group to be Tracked in Bwindi National Park