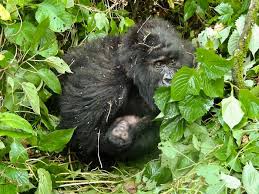 Bitukura gorilla family is filled with joy following the birth of a new member by an Adult Female Ruhara .

The group size is surely regaining after defections were witnessed for the better part of last year. Rukara silverback, who joined Kyaguliro group last year, has not yet returned.

Curious infants and juveniles of the group were seen struggling to feel the new infant who was tightly guarded and monitored by the dominant SB Ndahura. The mother for the better part of the day dedicates her time to breast feeding and grooming the infant. Despite the rainy season pounding all the sectors of the park, Ruhija’s Bitukura group has since looked bright and definitely in high spirits.  The family lead by towering Ndahura SB has been seen happily going about their usual daily rigors with no worries.

The family generally looks happy, closer despite the loss of three members who defected to other gorilla families in the due course of the year. ADF Betina has her wounds healing after the famous fight she was engrossed in when a wild family had an incursion with the family and come to a brink of snatching her.

Nduguyangu Jimmy, one of the trackers who located the newly born infant contends that the family often nests at Bugarama where Ndahura has lately established his home range. The lead silverback in a quest to assert his superiority over the family he heads nests near females but within the closer vicinity of infants and juveniles. The area however is a range zone for the elephants mostly during the night hours.

On another note however, Bitukura tourist guests were given a free display when the young Obia BB decided to engage Ndahura in a slop sided duel. For some reason, composed Ndahura SB was quietly feeding from some vine plants away from the main pack. I guess he needed some privacy because he was not so keen to join his subordinates at the feeding arena. It seems though the young charitable Obia had other ideas for the day.

He was seen bent on disturbing the old man’s peace by constantly pulling away the vines the dominant SB was keen to feeding on. The visibly irritated Ndahura tried to keep his cool till his patience came to a near snap. He tried to signal his displeasure but the pleas landed on Obia’s deaf ears. In full view of the entire family surged forward in a fit of anger, he leapt and got hold of Obia, beat the living day lights out of him and sent him fleeing much to bewildered juniors. Obia was seen wimpering from the far side of the pack nursing the pseudo injuries sustained from the one minute beating.

Next Mgahinga's Nyakagezi gorilla group gets a bouncing baby

2012 great year for Uganda’s Tourism and hopeful for future

July is the Best Month for UK Tourism